While we all love the simplicity, power and easy serviceability of an enduro engine, some 'experts' have openly claimed that they don't go the distance. These claims are usually made by people who have no experience at all in using an enduro as a travel bike, let alone use one to cover big distances that way and yet pretend to know everything about them... They vindicate their opinion by quoting manufacturers' recommendations for servicing and rebuilds, conveniently forgetting that these recommendations are based on using the bike in a racing environment.
​
Beta 480RR
The Beta 480 we have is a little different as it has separate engine and gearbox oils. In theory that should make the engine oil last longer as the clutch won't contaminate it. In reality though it has less engine oil (only 0.75 litres!) than an EXC and less engine case contact area for the oil to cool. The Beta engine oil thus runs a little hotter than the EXC. We therefore replace the oil in the Beta after about 1,000 to 1250 km.

​The theory that clutch wear will contaminate the oil might be true in a racing environment but isn't a problem when travelling. We replaced the gearbox oil in the Beta after 10,000 km… (yes, ten thousand) as it just slightly started changing colour, indicating minimal clutch wear and contamination. From now on we change the gearbox oil every 5,000 to 7,500 km. 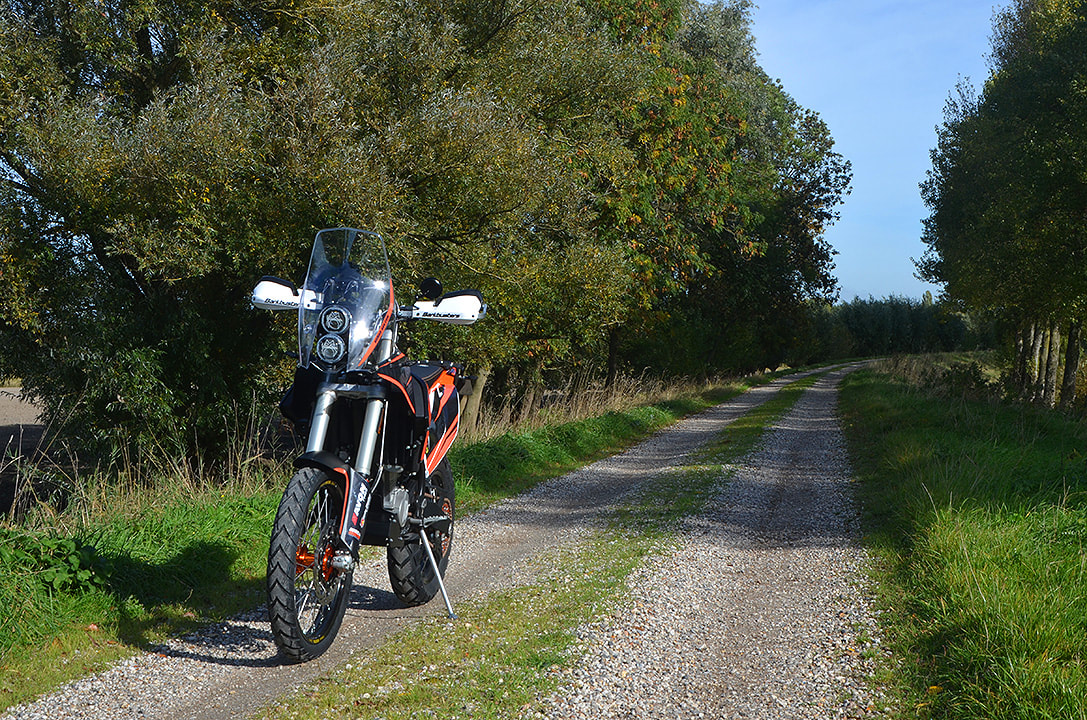 The engine oil service intervals may seem short when you're used to street bikes, but remember they only take a limited amount of oil. Like I wrote above the intervals we use translate to 4,000 to 5,000 km on 3 litres of oil, which is about on par with what's being described for dual sport 650 singles. An oil change is also something you can easily do yourself, it is literally a 10 minute job. Either go to the nearest garage and pay them for the use of an oil pan and collecting the waste oil, or do it at a campground using an empty Coke bottle. I always carry a small rubber collapsible funnel but you can also make one by cutting the top off an empty drinks bottle. To be honest I prefer the local garage as an oil pan is easier to use and you can wash your hands there afterwards too. Plus, when doing a campground change, you'll have to bring the used oil to a garage anyway. Sometimes though you don't have that luxury, which is why I carry the rubber funnel.

What oil do we use?
To be honest we've used all sorts and brands while on our trip around the world, from the more common brands like Castrol, Motul and Repsol to the cheapest 'home brand' stuff in Mexico and even cheaper scooter oil in India. To be fair it all seemed to work well, partly because the engines we used them in were relatively low strung perhaps. As one of them was aircooled and temperatures soared into the 48°C for 3500 km continuously while in Kazakhstan the oils didn't always have an easy life though. That same bike now has 170,000 km on the clock further emphasising that the oil worked well.

As enduros have a limited oil capacity, about half of most 650 dualsport singles, there is less room for error. Add to it relatively high power and engine oil temperatures can rise, or at least vary, quickly. We therefore use a higher specification oil. We use Motul 300V in both the KTM and the Beta, after having seen first hand that a lesser spec oil 'cracked' prematurely in the Beta after a particularly hot day and stuck in traffic. The 300V has a greenish tint over it which is handy as it gives an indication of the state of the oil through the sight glass.