Sweden and Norway via the Trans European Trail (TET)

We like Sweden and Norway for their wide open spaces, beautiful nature and generally laid back lifestyle. The summer days are long, especially when near the arctic circle and as most holiday makers head for southern Europe it's not overcrowded. Both countries are very different. Norway is known worldwide for its stunning nature, rugged mountains and majestic fjords. Sweden is the country of lakes, forests and rolling hills. Most visitors tend to shoot through Sweden as quickly as they can into Norway. They take the main road or E20 up to Gothenburg followed by the 165 to Oslo, and then claim Sweden is a bit boring… which is great for us as we now know which roads to avoid! Better still it leaves the Swedish countryside free from holiday makers! If you take the backroads in Sweden, of which there are plenty, there is a lot to see and enjoy. Especially on an Enduro as gravel roads are quite common in Sweden once you leave the main roads behind. 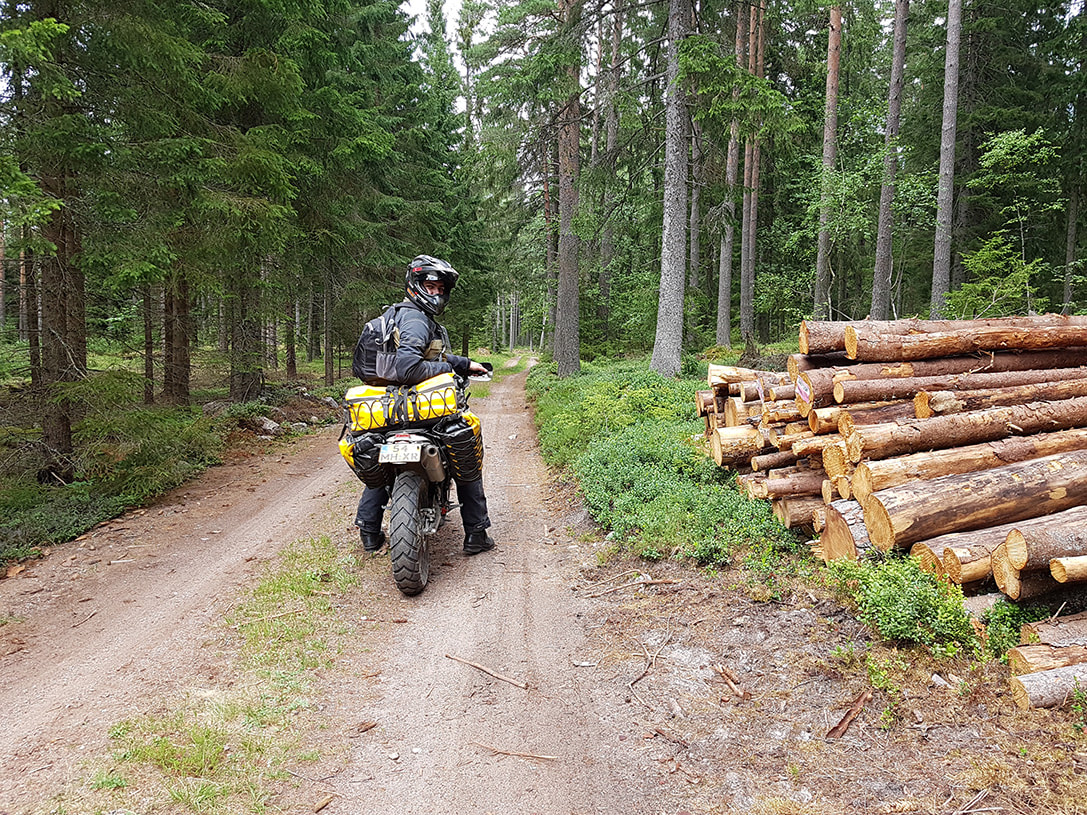 ​Once in Sweden and on the gravel part of the Swedish TET, the fun really begins. A large adventure bike is no fun at all there. The route winds its way through forests and along the many beautiful lakes Sweden has to offer. There is hardly any traffic either, pure bliss. There are some short more technically challenging parts thrown in for good measure but generally it's easy to do on a light weight bike.
​
I mean you don't take your glorified porta-loo over narrow mountain roads when a sign at the beginning says 'Maximum width 2.0 mtr'… we even found one stuck in a tunnel! We fully understand why Norwegians seriously hate people in motorhomes, having to put up with their stupidity and egoistic behaviour every summer. Luckily OSMAnd+ which we use for navigation, uses the excellent OSM Streetmaps which show more tracks and off-road options than most GPS systems. 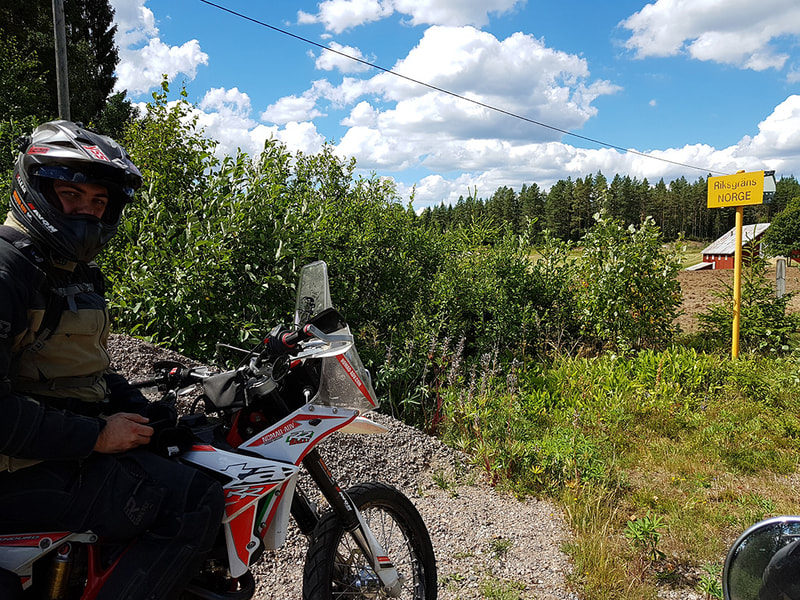 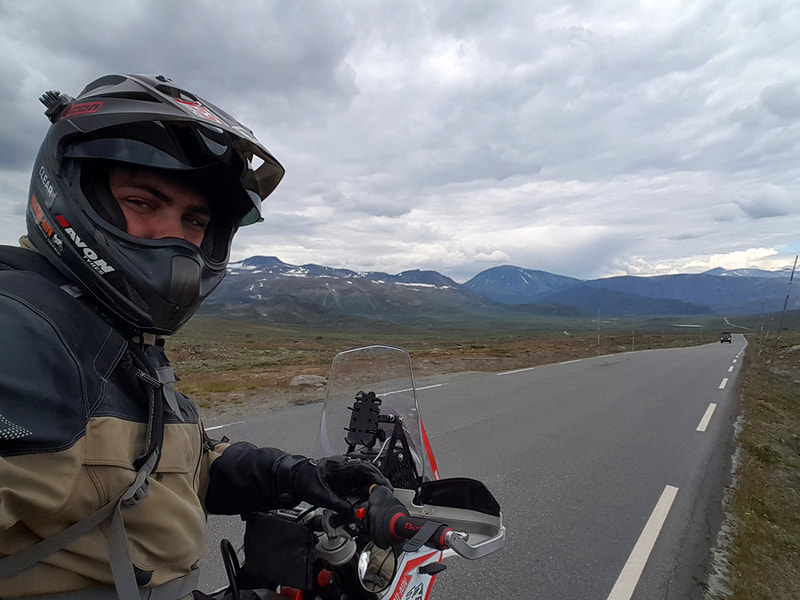 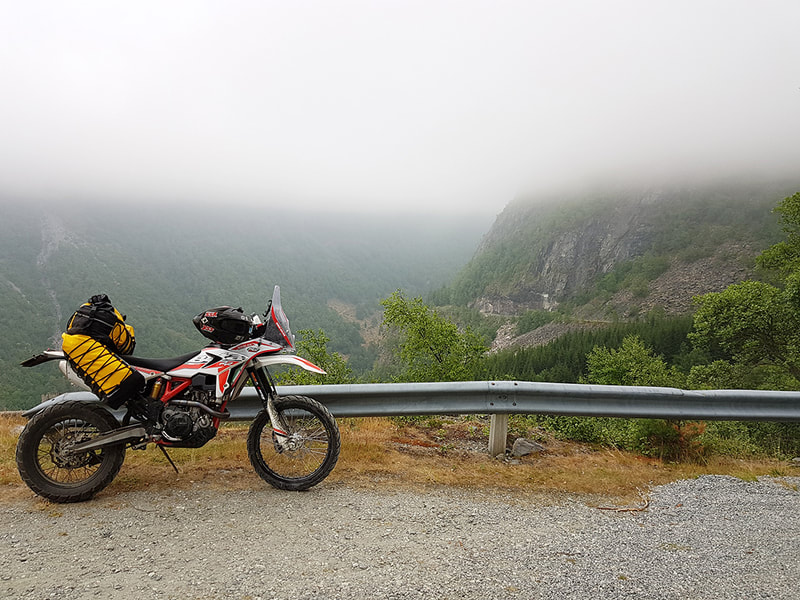 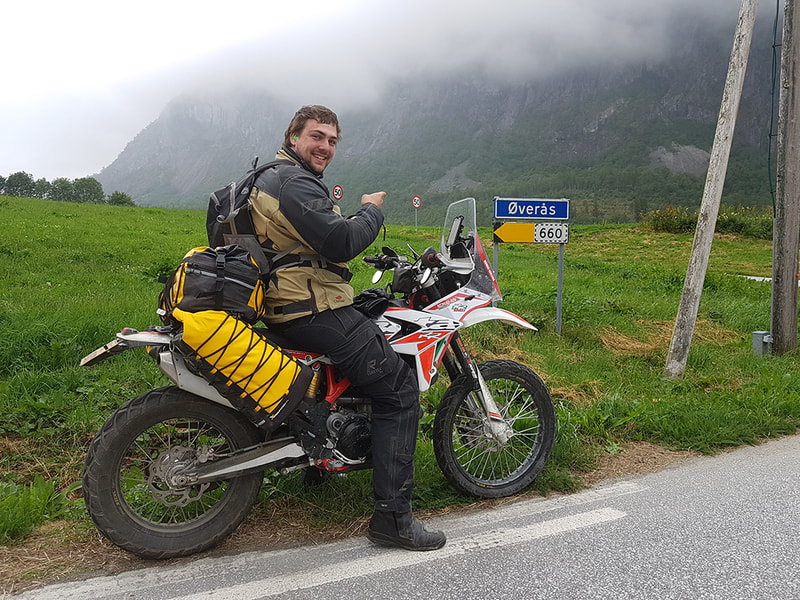 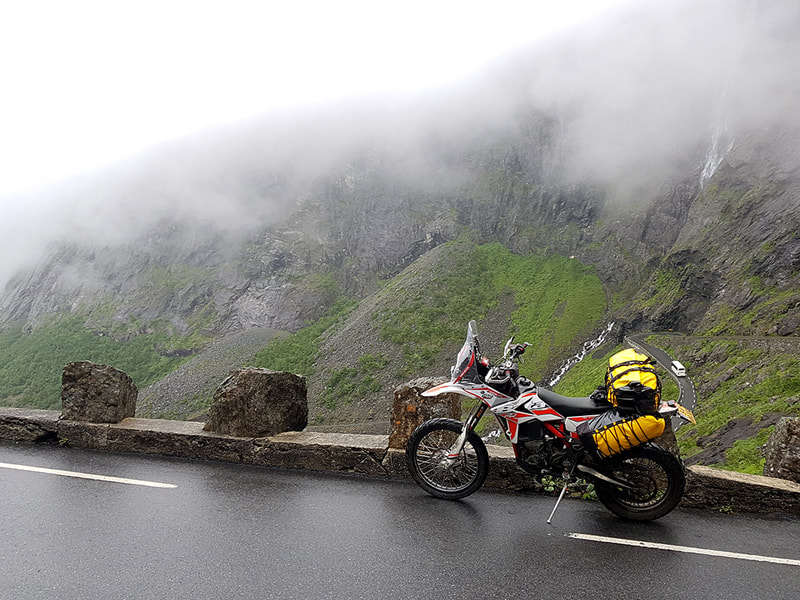 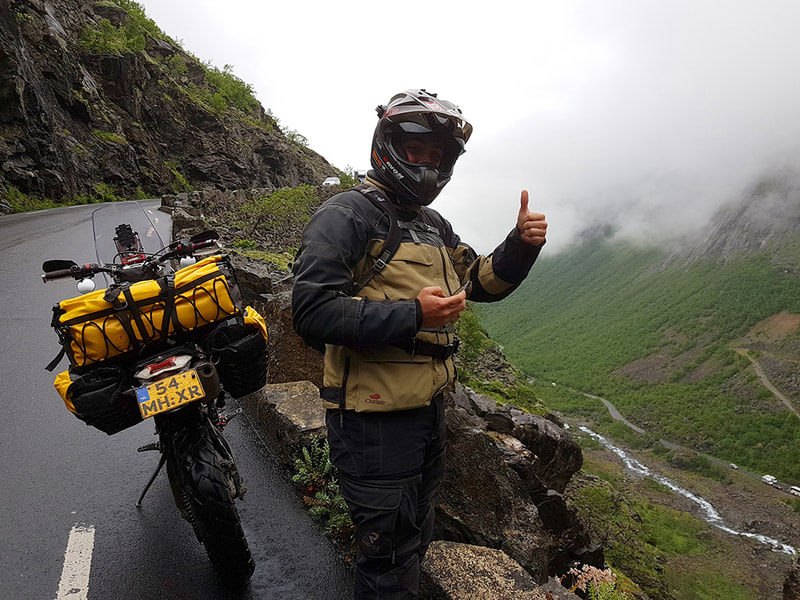 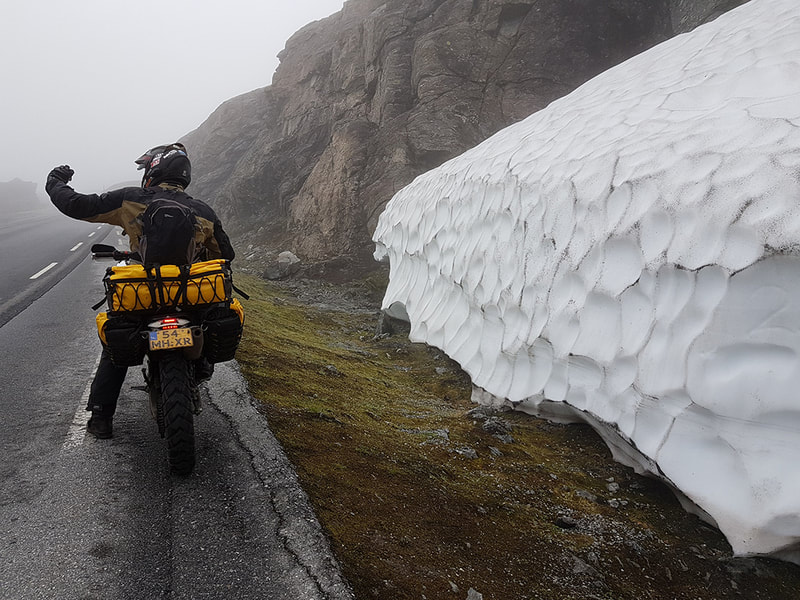 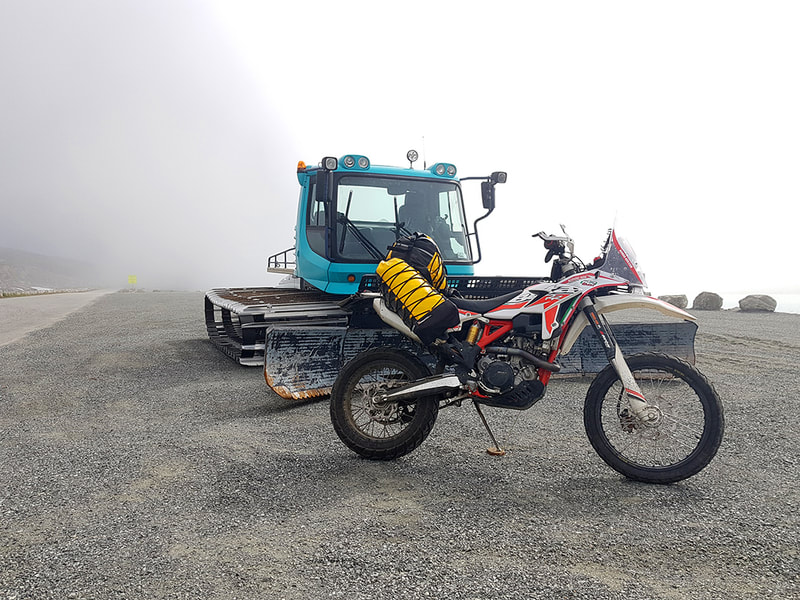 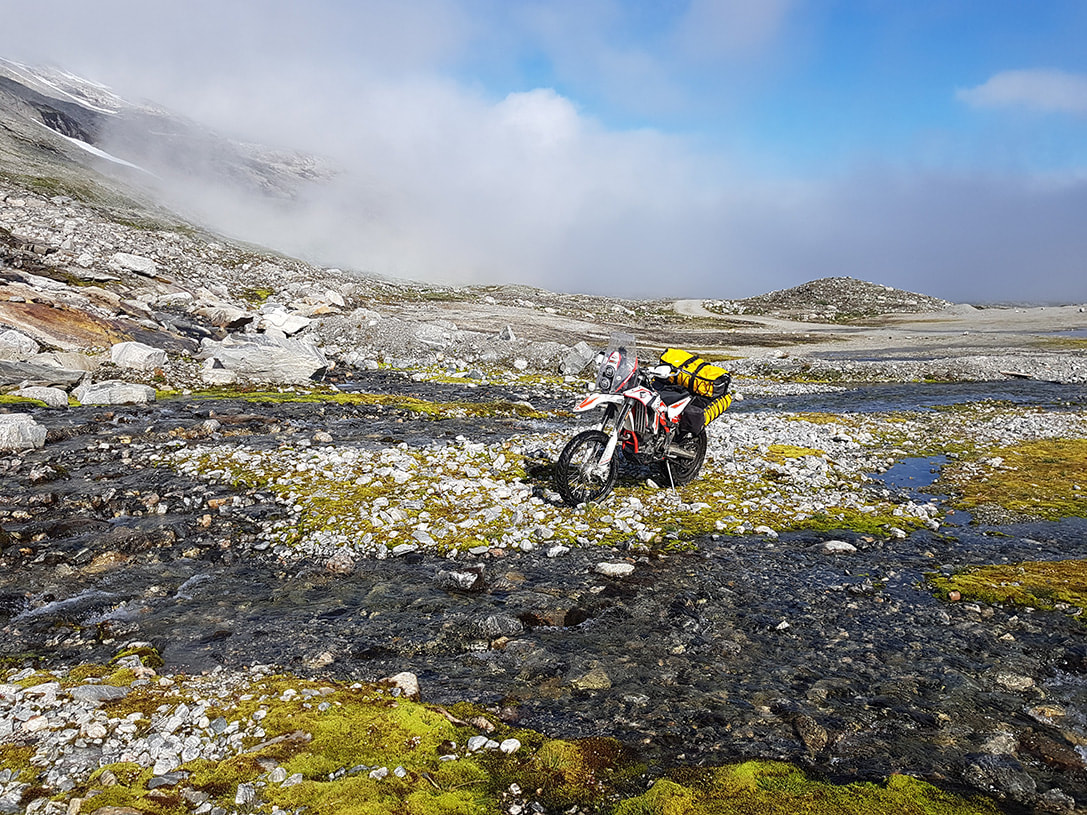 That brings me right to the beauty of an enduro for travelling. For a non-enduro ace such as me it offers the option to continue when the road ends and the tracks begin. I don't have to turn around because the bike's too heavy, too big or both. The superb suspension with 300 mm+ travel copes with it all without ever giving the impression of being stressed. Roads that would have had me rattling off the hinges on any other bike can now be taken with ease. What the above all means is that I can go places I couldn't before and enjoy the scenery rather than being hard at work wrestling my 300kg monster with luggage through it. It allows me to take tracks where I won't find holiday makers and loads of traffic. It thus allows me to enjoy the trip and really get away from it all. Yet when I want, or have to, I can take a motorway without a problem as wind protection, good seat and a long range tank allows me to cover them with ease too. With a 14/48 gearing the engine is unstressed and returns 25-26km/ltr at 110 km/hr. 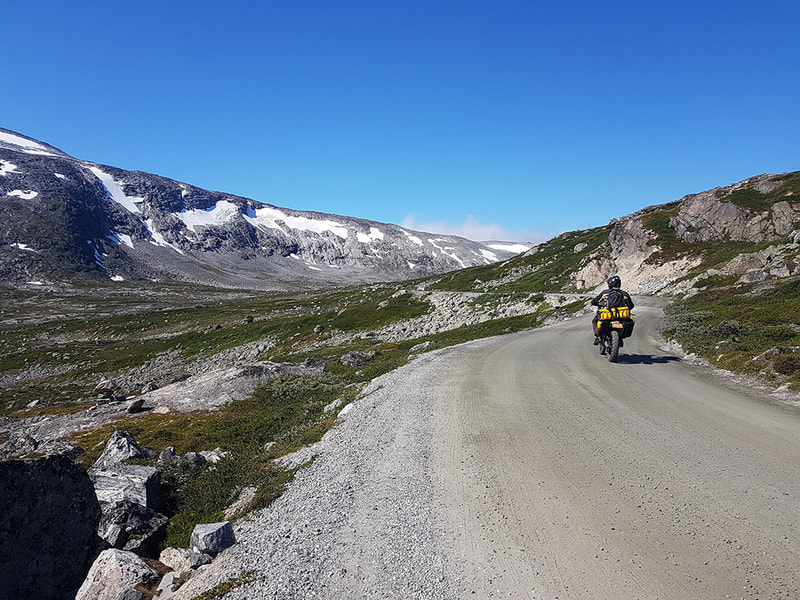 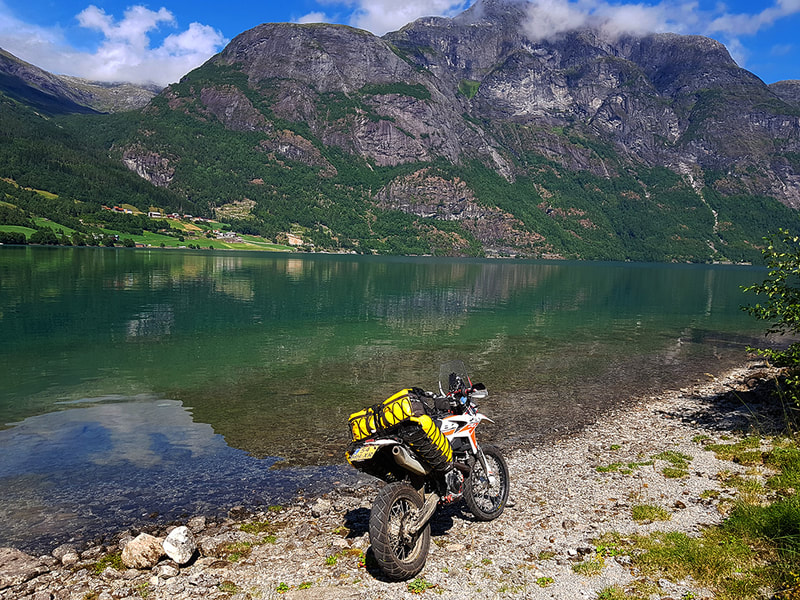 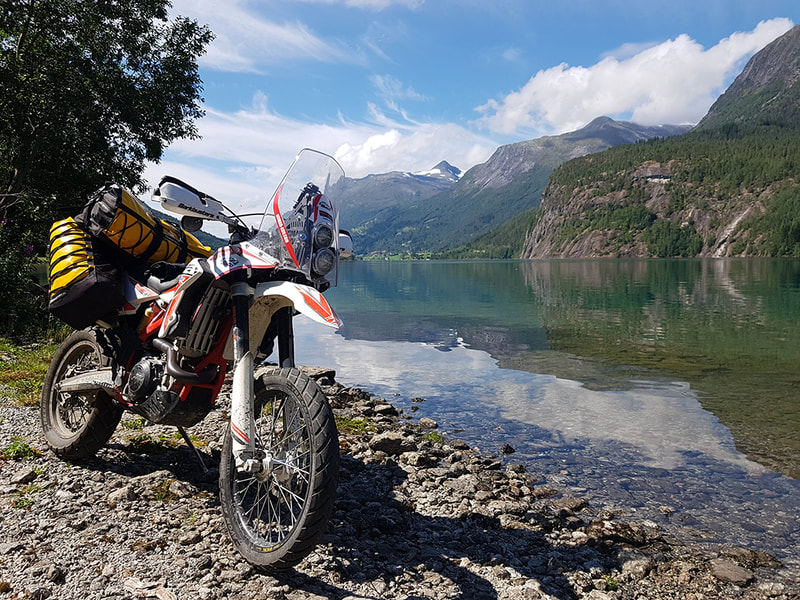 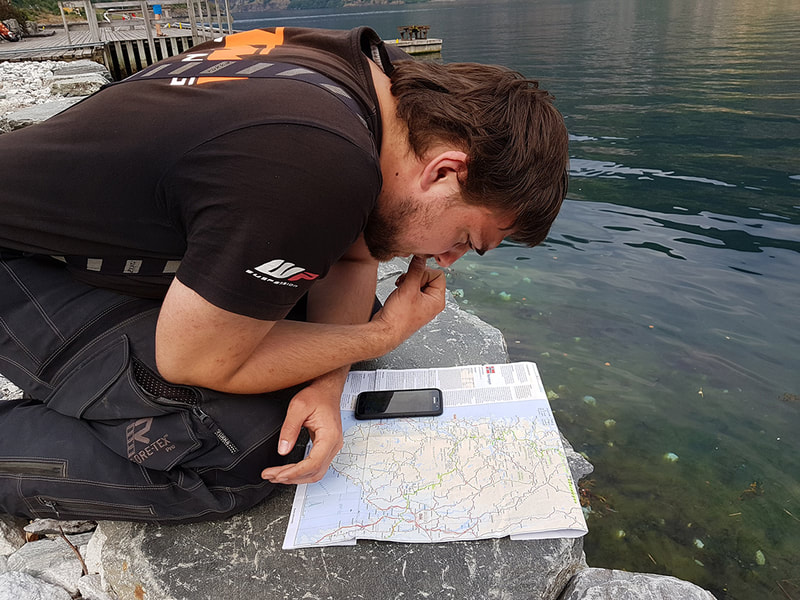 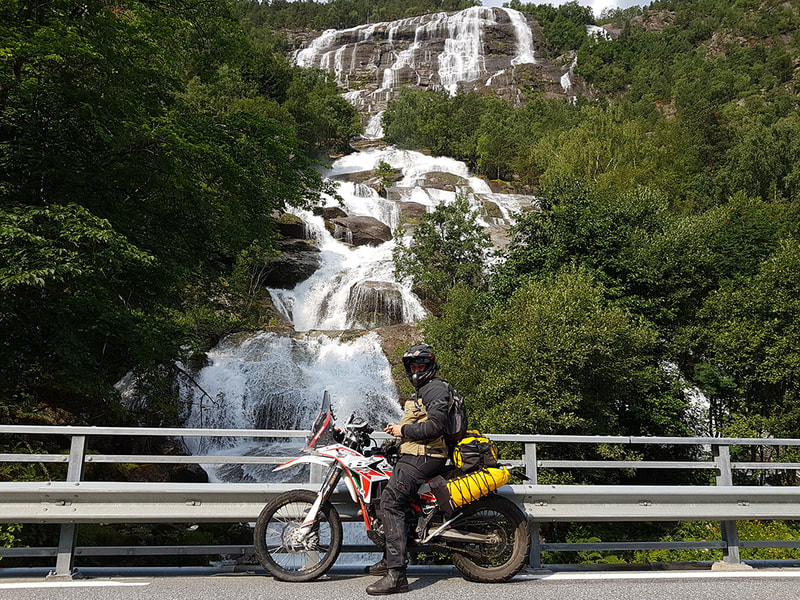 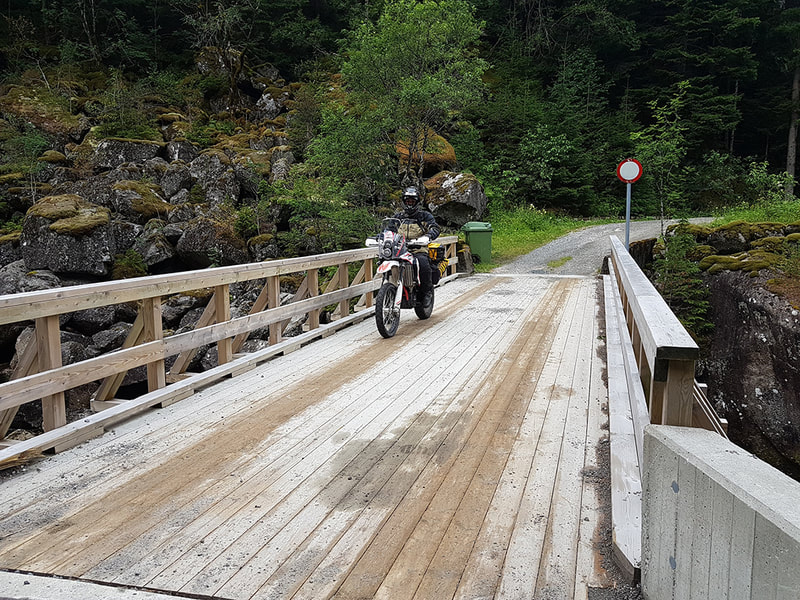 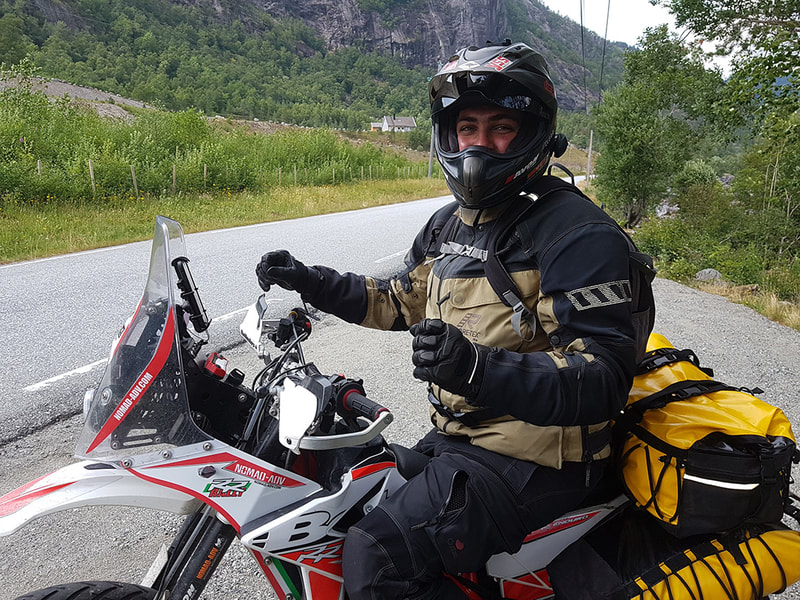 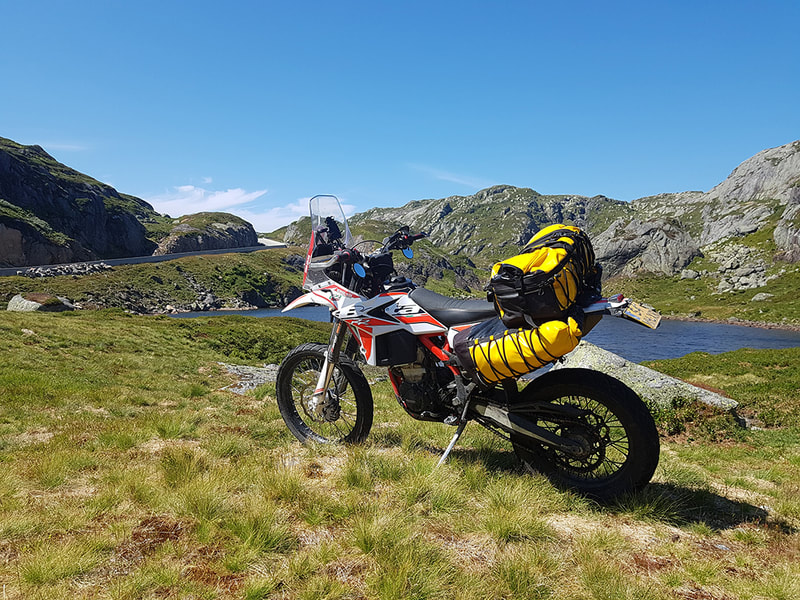 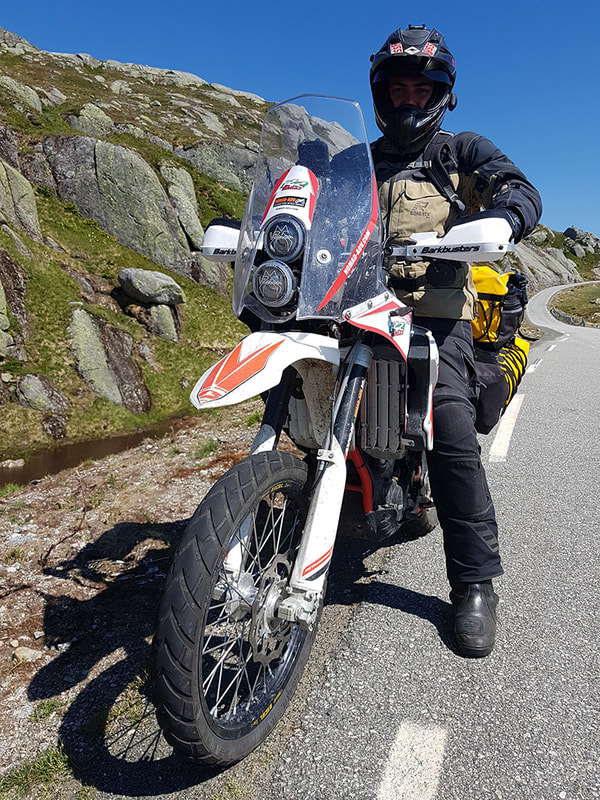 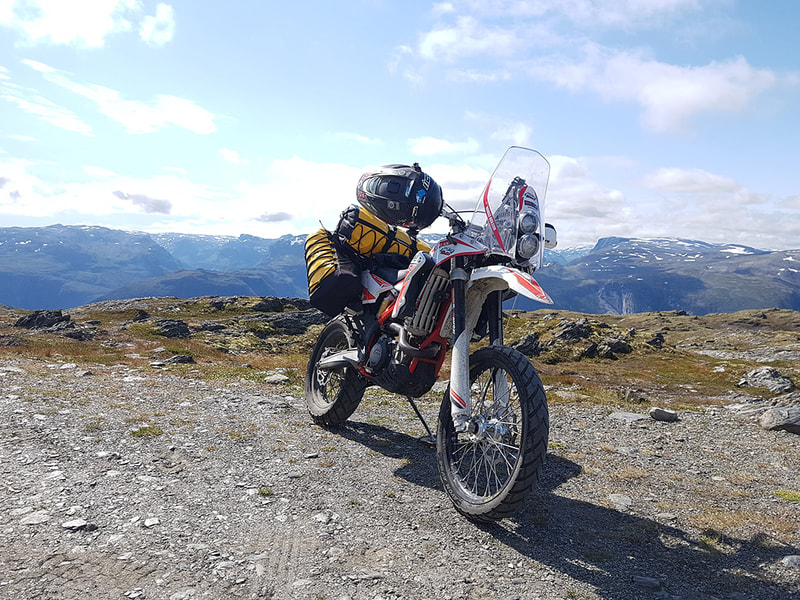 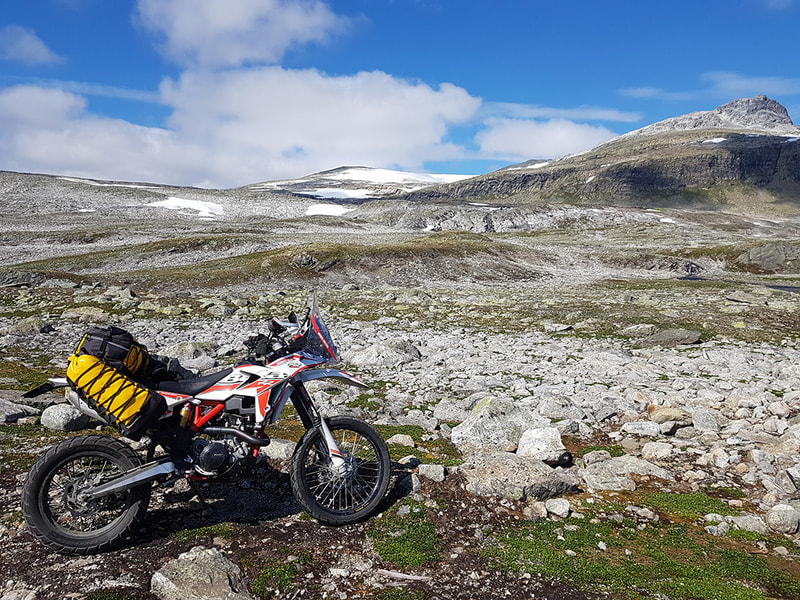 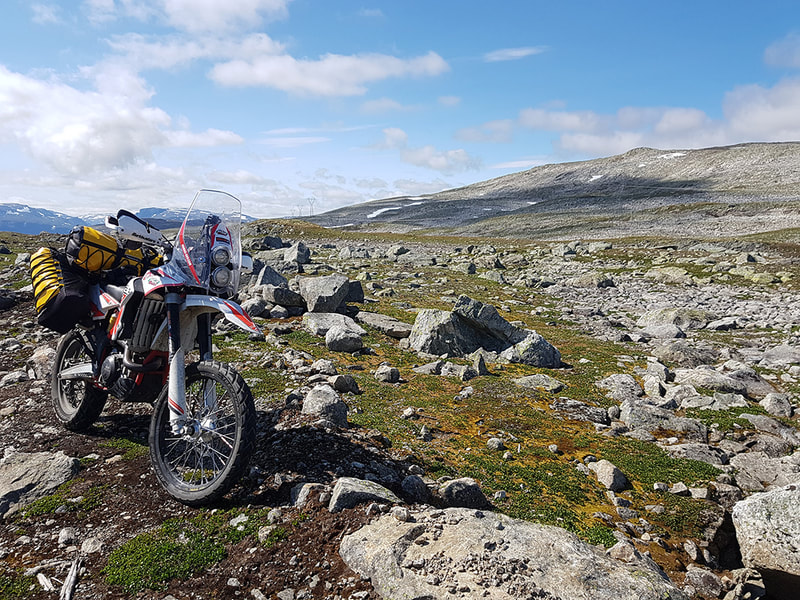 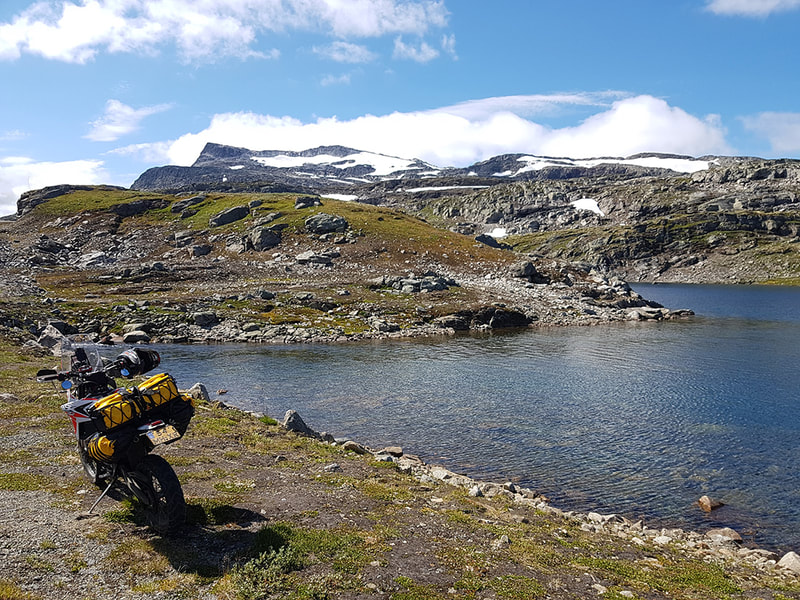 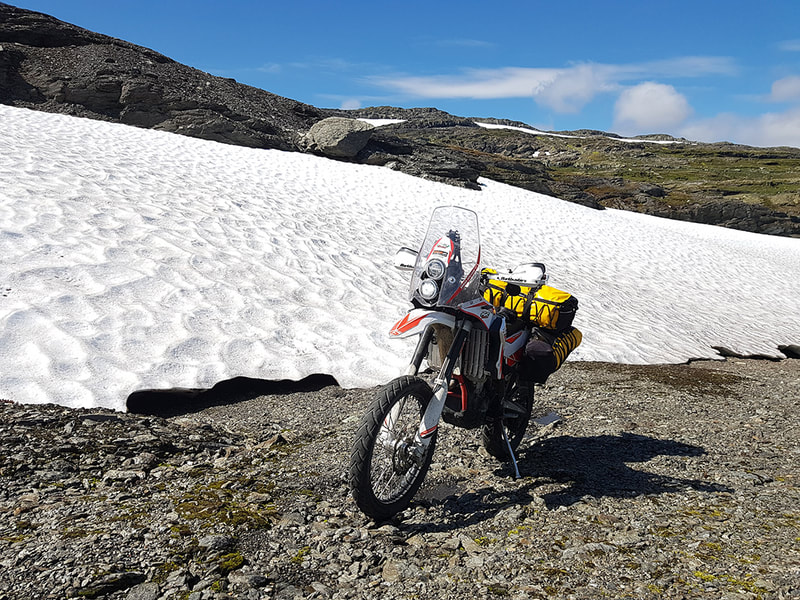 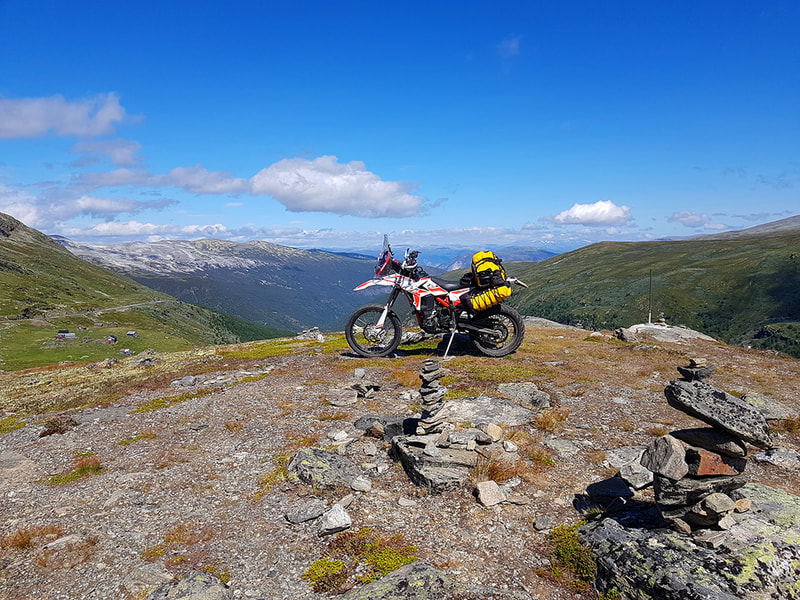 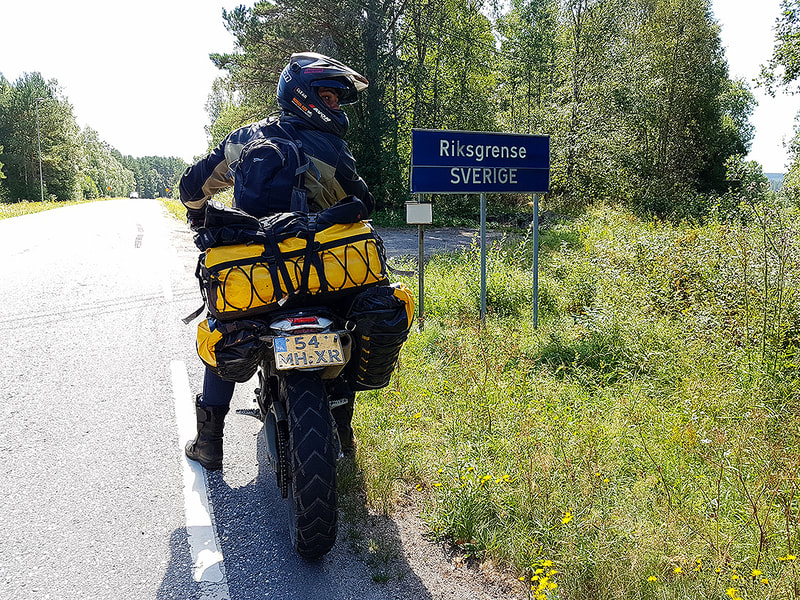 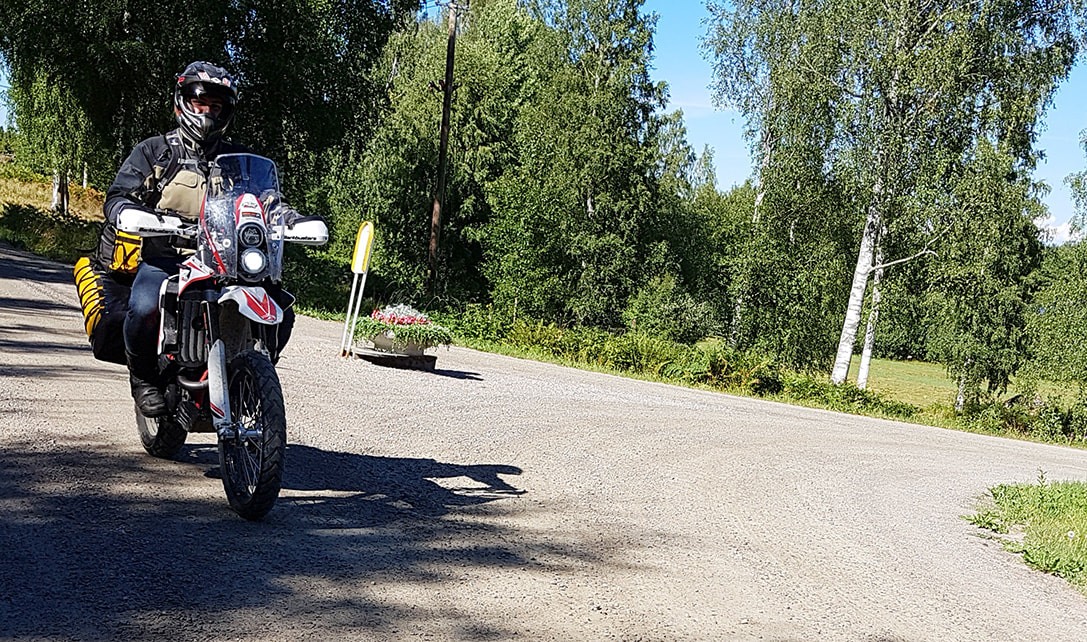 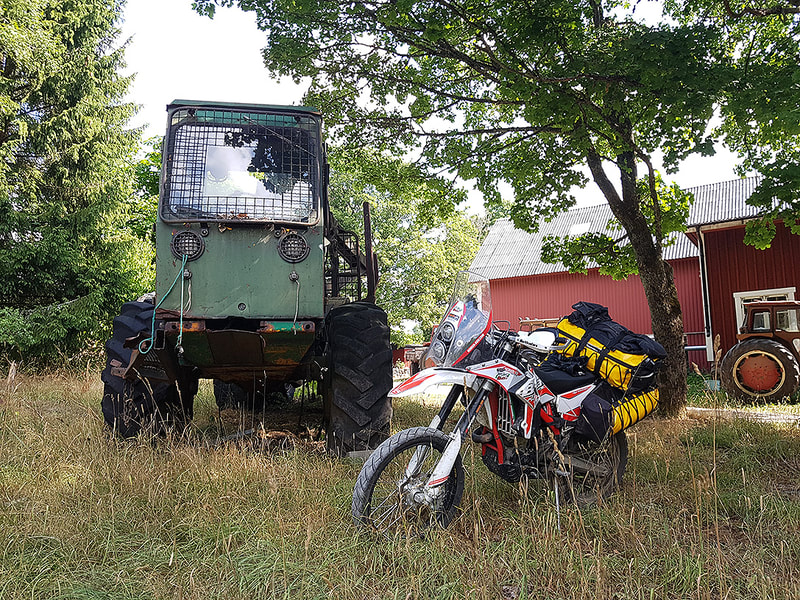